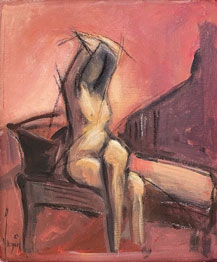 Antonia Ramis Miguel was born in Spain and has been painting since childhood. Trained in Europe, she studied for seven years with Professors Edgardo and Alceu Ribeiro, themselves students of the renowned constructivist Joaquín Torres-García.

Following her formal training and pursuing an interest in conservation, Antonia spent several years studying the techniques of, among others, Rubens, Sargent, Velázquez, and Vermeer which reinforced her artistic foundation. At present, she owns and runs her Art School and Studio, Miguel’s Atelier in Ellicott City, MD which also houses her personal art studio. 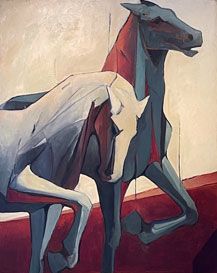 Antonia paints primarily in the medium of oil, on canvas. She has shown her work in individual and collective exhibitions in her native Spain, the United Kingdom, Austria, and the United States. Her work follows the tradition and school of Joaquin Torres Garcia and her mentors Edgardo and Alceu Ribeiro. Constructivism is the base and foundation of her work where the visual space on the canvas is broken down creating a spatial structure which interacts with the subjects represented.

“My creative process is a combination of a series of choices and a process of analysis and constant reviewing of what is happening on the canvas.” 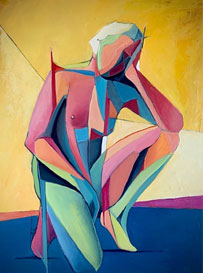 After selecting the subject that I want to paint, which can be inspired by any visual reference around me, I start applying the elements most important to me: Line, Tone, and Texture. My paintings are a combination of them, Line being by far the most important element of expression to me; something inherited from my mentor Alceu Ribeiro. 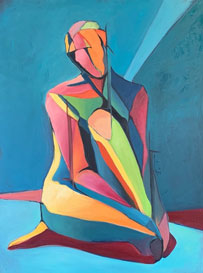 Once I have organized the space and subject in a way that is visually pleasing to me, I decide where the stronger and focal point lines will go. Decide what tones I’ll be using; decide which tones will better enhance what I’m trying to represent on the canvas. I might paint with palette knife or brushes; or a combination of both. I decide if the subject is going to have a source of light, which direction the light will come from.

Once all that has taken place on the canvas, it’s a process of observing. What works; what doesn’t work. Touch and retouch different areas. Keep observing and reworking until everything is in place and makes sense to me. 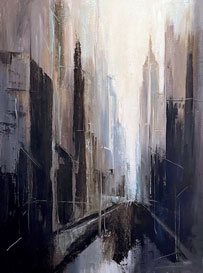 Most of my paintings are done using an idea as starting point; after that, it’s all a creative experience where I immerse myself, and when I enjoy the most my craft, when it’s only me and the elements I use to create my work. I work towards the effect that I have visualized in my mind, and where that painting obtains life itself.” 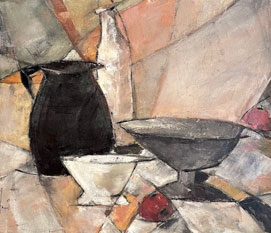 Antonia divides her time between Ellicott City, MD, Washington, D.C., and Palma de Mallorca (Spain). She teaches at Miguel’s Atelier, and offers workshops in Boston, Massachusetts and abroad (Europe). She collaborates as an art adviser for ARCK Art Resource Collaborative for Kids. Her work can be seen at the Julie Heller Gallery in Provincetown, MA; the Watergate Gallery in Washington, DC; and the HorseSpirit Gallery at Historic Savage Mill, MD.