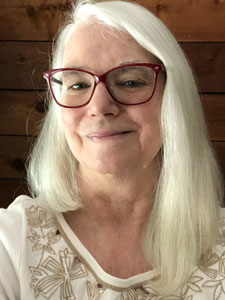 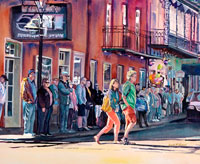 Sometimes April Rimpo thinks that she doesn’t select her subject matter, it selects her. This might explain why you will see landscapes, urban scenes, or paintings of people doing everyday things. She has always loved learning about other cultures and places, so in her artwork she strives to show bits of life that grabbed her attention and made her feel she just had to tell the story.

April works in transparent media, including watercolor, fluid acrylic and fused glass. Her fused glass work is primarily sculptural exploring galaxies, flora, fauna, and non-objective abstracts. Watercolor and fluid acrylics allow April to be more interpretive than her earlier oil and pencil work.  She believes it is the fact that watercolor and fluid acrylic flow in unpredictable ways that inspire her.  These media absorb her into the work; allowing the piece to develop in directions not fully planned, but with more passion.

This thrill didn’t exist when working in other media. By adding more of her emotional content April thinks those who see her art are more drawn to the story. In fact, a visitor at one exhibit told April that she thought April’s artwork was happy and that she felt drawn into it in a way that a photograph could not accomplish. Others are mesmerized by the sense of distance in April’s art. 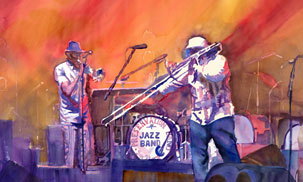 April feels a piece is complete when she thinks the mood she wants is achieved and the story shines through in the finished painting. Real success comes, however, when others tell her the story they see in the painting. Often their story is quite different than hers, but it doesn’t matter! She feels a tremendous sense of satisfaction for having been able to evoke a memory or an emotion in her viewer. What more could she ask for as an artist?

April has been involved in art to some degree her entire life. Her father and grandfather had both painted so her inclination to draw came naturally.  After high school, she took classes from a local artist which led to her first exhibit, where an art material manufacturer offered to purchase her painting to use in an ad for his materials.  Despite the positive feedback, April knew she was not ready and has continued to take countless art classes and workshops throughout her life. In college April studied Electrical Engineering.  She believes her engineering background taught her to see the world in a broad expansive way, through the eyes of others, and from different perspectives. Her artwork reflects that background. 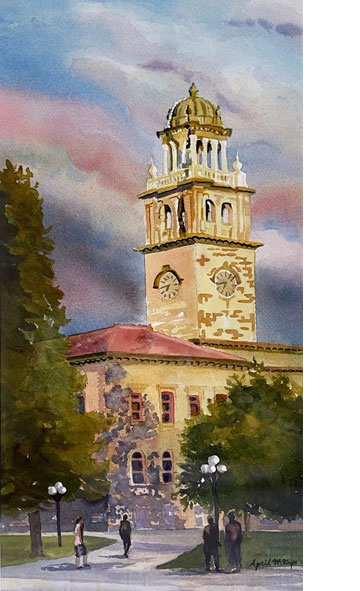 April also exhibits in a variety of local venues as part of juried shows, in addition to being represented in HorseSpirit Arts Gallery. In 2012 and 2013 she had work in Agora Gallery in New York City and from 2015 – 2018 she was included in Touchstone Gallery in Washington, DC.

April conducts a Mentorship to assist artists find their artistic voice.
See more of her artwork at her website.