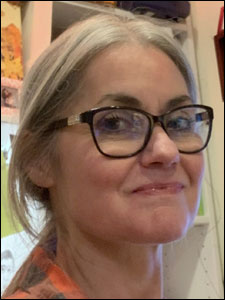 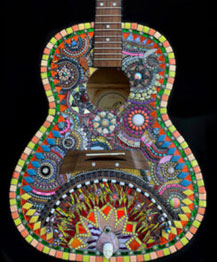 For Beverley, Mosaic Art is a culmination of her creative passions from a very early age, including portraiture, needlepoint, quilting, ceramics, incessant drawing, and adoration for color! 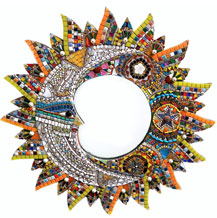 Beverley started her professional life at John Michael Design PLC, London, England, 1988 – 1990, where she was the Design Manager. Once stateside, she worked at Beth Singer Design, Washington DC, 1992 – 1993 as their Production Manager. She then worked with Kinetik Communication Graphics, Washington, DC, as the Production Director from February 1994 – January 2016. Beverley joined HZDG (Hirshorn Zuckerman Design Group) in 2016 as a Senior Print Buyer.

Beverley uses many types of media in her mosaics, including glass, ceramics, beads, tiles, and unique found treasures. Because her education and professional background include graphic design, composition is in her nature. She applies this in a 3-dimensional way, creating a detailed extravaganza of tactile shape and color, which is supremely rewarding to her. Beverley is thrilled when people enjoy the artwork she has gained such satisfaction in creating. 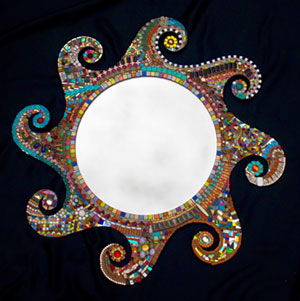 Throughout her career, Beverley has continued to pursue her art. She has shown and sold her work in the House of Fish Gallery in Pensacola, FL, and the Mariposa Gallery in Orange Beach, AL, HIVE Artspace in York, PA, Artist’s Emporium in Havre de Grace, MD, and numerous craft shows in MD such as Artscape in Baltimore, Sugarloaf in Gaithersburg, and Paragon in Silver Spring. Beverley’s art is available at the HorseSpirit Arts Gallery in Savage, MD.

Beverley resides in Gaithersburg, MD, with her son, two daughters, and their small, adorable dog Kittee. 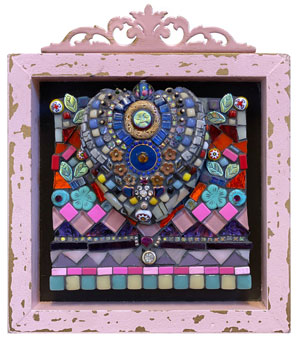