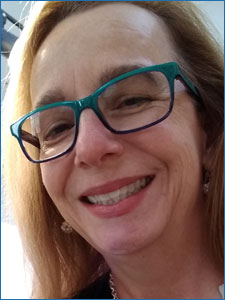 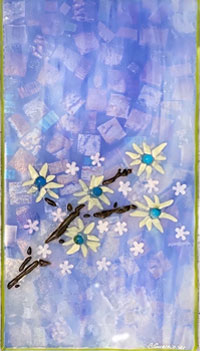 After admiring art glass her entire adult life, Chris Guercio stumbled upon a fused glass class in Columbia, Maryland in 2009. She was hooked within just a few sessions, and after a year, decided to buy a kiln and start fusing at home. She took over most of her laundry room and started experimenting. Her studio has now grown to include the family room and she has three kilns. She has taken classes at the Corning Museum of Glass, Vitrum Studios, Weisser Glass, Pittsburgh Glass Center, Salem Community College Glass Education Center, and has studied with several well-known glass artists in their home studios.

Chris finds glass fusing intoxicating, with endless possibilities for artistic expression. Much of Chris’ work explores the depth of glass and incorporates a sense of movement. She is also an avid experimenter. Her pieces range from two-dimensional to sculptural. 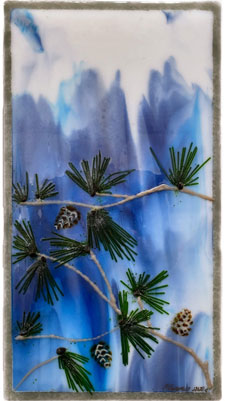 When she first began fusing glass, Chris simply sought to bring her dreams and visions into reality and that was her reward. But several years later after she started displaying her work in public spaces, she began to receive feedback from patrons and passers-by. They talked to her about their emotions when they looked at her fused glass pieces, how her artwork resonated with them, how certain pieces spoke to them, and how they would treasure her fused glass creations in their homes. Sometimes they just thanked her for brightening a hallway. She has no greater reward than to have touched the heart of another person with her artwork.

Chris has branched out into the worlds of alcohol inks and Zentangle® artwork. She is a Certified Zentangle Teacher (CZT). She offers classes (both online and in-person) on Zentangle, alcohol inks, and a creativity bootcamp. 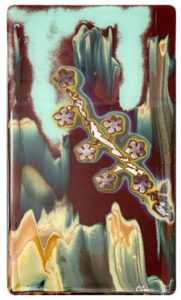 A native of Baltimore, Ms. Guercio attended public schools in Ellicott City, Maryland and graduated from Loyola College (now Loyola University). She later traveled widely and lived in Provence, France for a year. She has two daughters, both of them breathtakingly beautiful, headstrong, and intelligent, and two grandchildren. She lives a quiet life in Howard County, Maryland with her dog Prince Gizmo and cats Leela and Casper. 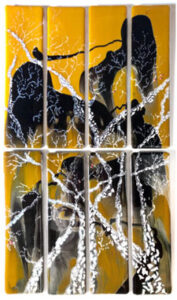 Chris’ art is available at the HorseSpirit Arts Gallery in Savage, Maryland.